PageRank is most underestimated factor in SEO. Some webmaster believes it is dead, some believe Google still using it but not heavily, and some just don’t care about it. So here I am going to share my all points about PageRank and feel free to add your values in the comments box.

Gary Illyes: We Still Use PageRank in 2017

In 9th Feb 2017 Gary Illyes tweet this: Did you know that after 18 years we’re still using PageRank (and 100s of other signals) in ranking. 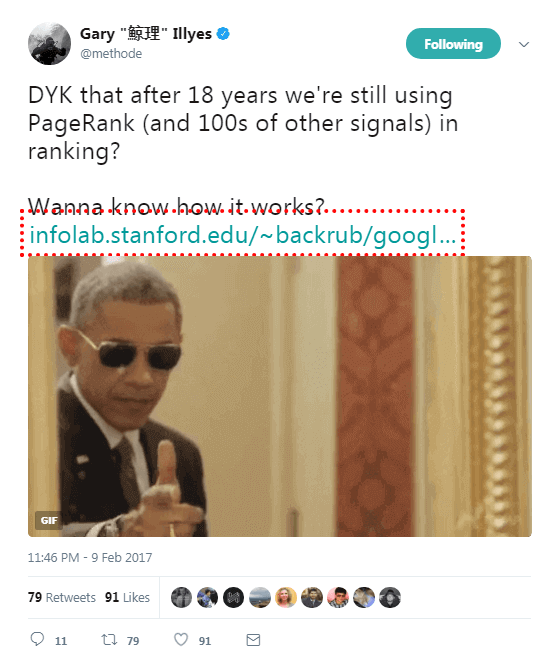 So why some SEO people said PageRank is dead.

In reality, It is dead on browser toolbar only. Google was displaying PR in the browser toolbar, so users can understand that particular site has N number of reputation from Google. The toolbar PR was displaying only 1 to 10 digits only, but the actual PR is totally different. For example

Here x is any floating value, for example, your actual homepage PR is 55.5, so it is considered as PR 2 on the toolbar. Remember Google toolbar was only displaying site homepage PR because that is how someone can understand this site is how much reputable, but in reality, PR is also calculated on other pages as well. And if you think both websites have 10 PR it does not mean they have the same power of link juice, may be site A has more x value than site B, so here toolbar only shows 1 to 10 digits.

So why Google shut down PageRank toolbar from the browser.

Google thinks it is more misused by blackhat webmaster(To buy/sell links) than regular people(Who used it to know the site reputation in the eyes of Google). So they shutdown the PR toolbar and they realize it is a fantastic move, and hence Matt Cutts said , now we will not going to update the PR value in future as well, but some people misunderstood the words completely.

The born of other metrics.

Once Google shut down the PR, the SEO agency company start developing their own tool, for them, it is like golden opportunities. And people start believing like PR is dead, and now Google uses Page Authority or Domain Authority, Audit score, Trust Flow, Citation Flow, URL Rating, Domain Rating, Ahrefs rating etc. Their own blogs start talking more n more about their own metrics rather than PageRank and people just forgot about PR Existence.

But you should use their metrics value to get rough ideas, don’t believe they are very accurate because PR is more powerful than other metrics, here is few reasons.

1. PageRank is calculated based on the iterative formula.

Ex - Suppose there are 100 web pages, and all are interlinked with each other. So when Google calculate Page A, B and C then assume the PR of all three-page is 11.5, but when Google sees other X, Y and Z pages links to them then its value needs to change. So every time Google will get different values, and it becomes more complicated if there are so many links pointing to each other and hence Google use the iterative formula to get the final value of PR. For example first time Page A value is x1= 11.5, second time x2= 15.7, x3=17.8, x4=12.4, x5=12.50, x6=12.55, x7=12.557, so in the seventh time the value is not changed so much(By comparing past value x6) and hence Google assign that value for PageRank. While third party tools do not use such a method because it requires a robust algorithm + more computer resource. And, Googlebot crawls 10000x time better than combine of all moz, majestic, semrush, ahrefs and all new tools, so How you can say their value is accurate. They even can’t crawl full Reddit site as well, go and analysis some old Reddit thread, and you will know the truth.

I know people and Google itself said PR is easy to manipulate because the more backlinks you create, the higher PR you will get, but Google has already built a strong algorithm which can avoid spam links on PageRank calculation, while other metrics can’t think about it. They just assign if X is spam website, and it is linked to any website then it is considered as spam flag, simple as that. While PageRank can works with other algorithms as well, for example, Google trust algorithm, on which they compare all networks nodes, not just two links, it creates big node network and analysis all incoming and outgoing links.

If you still believe Google does not use PR then refer nofollow docs on Google site, they made a nofollow attribute, so the anchor text and PageRank will not pass when you use the nofollow attribute. If you believe quality backlinks means higher position, so you should also believe on PR as well. I mean how Google can assume these links are very good, they can’t use words like low, medium and high-quality backlinks, instead, they need to use some numeric value, and that is PageRank. And last but not least, Googlebot still uses PageRank value for crawl priority.

Backlinks influence many Google off page metrics value, but PR is still a top factor among them.